The earliest batch of PS3 had the ZSSR5391A power supply, which as you can see in the above table draws a lot of amps from your power outlet. You can replace it with newer compatible power supply models that draw less power, and also produce less heat.
The second criteria is to try to find the lowest input amp and lowest output amp that works with your PS3 model (for APS models, this means the higher the model number, the better).

The above is wrong in stating that:

I came here to say this and was glad to see someone else already brought the matter up. A lower rated PSU would in fact be worse if it couldn't supply sufficient amperage under certain conditions. In those cases, you could see unexpected behavior such as freezing, corruption and even intermittent YLOD.

Newer PS3s are more efficient than the original design. As a result, newer model PSUs have a lower rating as the PS3 hardware itself is not as demanding.

In most cases, you'll want a PSU rated at least the same as the one that was included with the PS3. Going with a higher rating would be optional, with the caveat that the PSU may generate a higher level of heat. Going with a lower rating should be discouraged.

Things to take note of before doing any testing
1. The voltage your country uses, this can be seen on most wattage meters by simply pressing the Voltage button. In North America and Japan this will likely be between 100-120V. For the rest of the world the voltage will likely be between 200-240V
2. The ambient temperature of the room must be measured either at the end of the testing or throughout the entire test


Testing methods:
1. Choose if you want to do all of the testing for the console in the horizontal or the vertical orientation.


2. Set the fan speed to a single number and note down what that number is, if you would like to do the testing with the syscon fan profile just make sure to note that down as "syscon default profile"


3. Make sure to set the console in an area where:

4. Determine which game you will be using, and if the power measurements you get are consistent across multiple runs of the same area in game
eg: A race in GT6 may draw more power than the exact same race replayed using the in game replay tool.
eg: GTA 4 or GTA 5 may draw more or less power when driving down the same street due to a difference in the number of cars or pedestrians on screen at any one time.

Note that 120V-only supplies don't exist. The highest currentrating is for the lowest supported voltage (which is 100V notated on the Power Supply powerrating label):

The SKU Models table has several issues: it oversimplifies information conveyed on other pages and it does not distinguise within SKUs of the variants available (as in the different PSUs used in them). Further it does not distinguise between maxi, peaki, maxo or peako (and if we would, if we would assume the lowest/highest or mean of each of them for the overal range). Euss (talk) 21:04, 3 February 2015 (EST)

Gap is the space measured between 2 pins, while pitch is measured from pin center to pin center 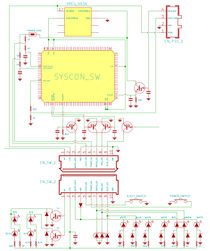 Syscon connections to PSU and to switch board