about the disabled SPE: syscon reads it’s internal (non-encrypted) eeprom @ 0x48C30 which is value 0×06 on all  CEX  consoles and will set the cell config ring accordingly for 7 SPE’s. SPE0 and SPE2 are reserved for bootldr and metldr for isolation respectively. Setting the value to a nonworking state (e.g. 0×00, 0xFF, enabling a defective SPE or disabling a needed SPE for proper boot) might brick the console, locking you out from restoring the correct value to the syscon eeprom. Config ring is checked against the known one in bootldr. If you were to modify syscon and the config ring, it still wouldn't boot and would panic as the config ring does not match the expected one.

* : ofcourse with new hardware revisions, it is updated in factory. See Flash#new_metldr.2 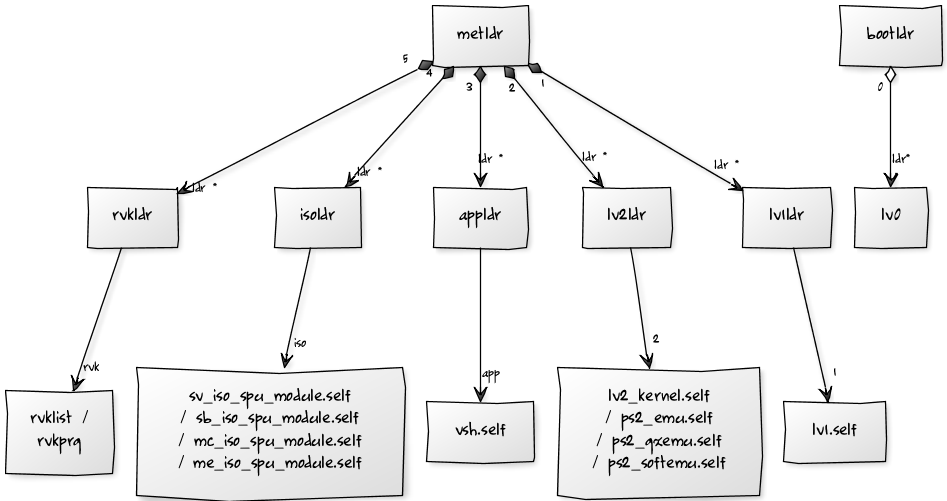 Lv0 has now been changed, LV0 now appears to encapsulate all of the Loaders (appldr, isoldr, lv1ldr, lv2ldr). Now in order to break the chain of trust we need to be able to decrypt/exploit LV0 (or bootldr which loads LV0) and reverse the obfuscation in the loaders -> done! see http://www.psdevwiki.com/ps3/Keys#Key_Scrambling

not in this diagram: the added .2 metadata