From PS3 Developer wiki
Revision as of 06:25, 3 February 2013 by Euss (talk | contribs) (→‎Replacing the internal harddrive)
(diff) ← Older revision | Latest revision (diff) | Newer revision → (diff)
Jump to: navigation, search
File:CECHC04 NAND-system.jpg.JPG
Most of the system software is on the harddrive, without one you get this error instead of XMB

Is connected internally to South Bridge wich contains ENCDEC device to manage XTS-AES-128 encryption/decryption, and a SATA-150 controller with a maximum transfer speed of 1.5 Gb/s.

The data in this table has been copied from manufacturer documents (datasheets or productsheets), availables at Harddrive manufacturers support webs

XTS-AES-128 means that there are 2 keys of size 128bit actually, the one for tweak encryption and the other for data encryption. Both keys are different on each PS3 console and can be easily dumped e.g. with modified sb_iso_spu_module.self. These 2 keys are sent to ENCDEC device which performs HDD encryption/decryption. HDD keys are NOT stored in EID4.

For compatibility, if you have a SATA-300 (sometimes called SATA-II or SATA2) harddrive, you should sometimes set the harddrive via jumper to enforce the slower SATA-150 speed, instead of default 3 Gb/s of SATA-300.

The PS3 also supports external harddrives connected to the USB port (identified as USB Mass Storage device) using only FAT12/16/32 file systems format. File systems like UFS/UFS2, EXT3/EXT4, which are natively used on internal harddrive cannot be used on external on a non-modified system. You can format it to any size up to 8TB **, which is the theoretical drive size limit of FAT32. There have been verified success of 2TB external harddrives working with the PS3. The whole drive needs to be formatted into a single 2TB FAT32 partition using special software tools like fat32format.exe that can handle large drives. Note that FAT32 supports a maximum file size of 4GB. 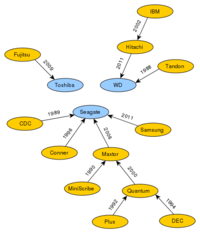