It seems mmCM with Cobra Mode enabled has a hiccup issue processing FMVs when playing a PS1 game from a external HD, but using other programs such as ManaGunZ or IRISMAN with Cobra enabled or disabled completely negates the problem. When playing PS1 games it is best to use a alternative program rather than using the original mmCM or simply disable Cobra Mode and then use mmCM. There is multiple ways to deal with the problem and all down to preference.

It has been a frustration to PAL PS3 users (PS3s bought in Europe, UAE, etc) when they felt stuck playing their nostalgic and favorite PS1/PSone NTSC (US or JP) games in slow-motion and audio-glitched sub-par PSOne Classic conversion. The observed cause of the slowdown and audio issues is that a PAL PS3 unit forces NTSC 60Hz games to run in PAL 50Hz mode so the framerate is reduced to 50 frames per second (fps) instead of 60 fps which also affects BGM and SFX audio, sounds like a movie or music track played in slow-motion. 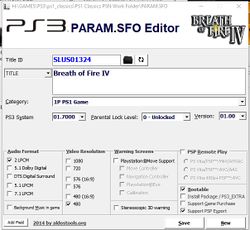 Before turning the conversion folder into an installer PKG with TrueAncestor_PKG_Repacker_v2.45: