Difference between revisions of "Syscon Hardware" 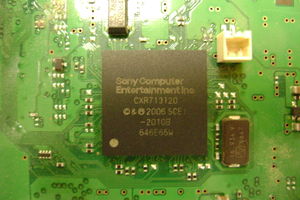 Syscon is the main power controller chip. It is responsible for powering up the various power systems and for configuring and initialising the CELL BE, RSX and South Bridge. It communicates with these devices via seperate SPI busses. There is external access by JTAG (disabled at factory by blowing a fuse), an EEPROM programming interface and Serial (UART). The Syscon is a SoC and consists of an ARM7TDMI (ARMv4) CPU, a 256KB EEPROM and 16KB RAM.

Note: for more specific information per model, see the links to each subppage in the Serialnumbers @ SKU table.

SCUARTD packets includes header of 0x3 bytes and optional payload (depending on the command). Packet IDs are not important, they are used only by clients and processed by SCUART daemon. SCUART daemon opens terminal file /dev/ttyS0 and use it to send commands and receive responses.

A start of syscon's update procedure:

A syscon's update operation in SCUARTD consists of following steps:

You can attach a 3.3v TTL cable (LV-TTL) to the UART on syscon (UART0_TxD, UART0_RxD). Baud rate is 57600. There is a simple plaintext protocol involved. This varies on different syscon models. Example:

Where the hash is the sum of command bytes & 0xFF

you should terminate commands with \r\n, the syscon messages are only terminated with \n

Here are some of the commands/messages encountered:

disabled in factory after production on retailmodels