In typography, a font family (also known as typeface) is a set of one or more fonts each composed of glyphs that share common design features

In PS3 firmware 2.00 it was added a feature that allows the user to select the font style in XMB column

->[Theme settings]->[Font] from the default "original", "rounded", or "pop". This same setting can be modifyed by installing a .p3t theme and theoretically the setting should be stored in the list of "user settings" inside XRegistry.sys

Some parts of the firmware specifyes the font style that will be used by using his "font familly" as can be seen in RCOXML Fonts, there is not a known complete list of all the font families used by the system though. And is posible to change color, size, shadow and other text effects in the RCOXML Objects related

Other parts of the firmware as the blu-ray player software, the PSP emulator, or the webbrowser uses its specific fonts tthat cant be considered "system fonts"

How to display extended CDATA characters in .XML files with notepad++ style configurator

For other font references in PS3 firmware see Discussion page

BUTTONS group, from "private use area" inside imagefont.bin PS3, with the UTF-8 hexadecimal value

The purpose of imafefont.bin is to override some of the glyps from the standard unicode character map used by the TTF files. Contains icons in high quality using colors, alpha, and optionally animations

The new format is shared between PS3 and PSVita, the only difference is the endianess order of some values (because are different processor architectures), PS3 is big endian and PSVita little endian

The access to imagefont.bin contents is made by reading the first 8 bytes of the file (main header), then all the other areas are readed in a "bottom to top" order:

The header is only 0x8 bytes lenght, in it can be seen the format_version of the imagefont structure (this is speculative though, needs to be confirmed), the index_entries that in the practise is the same than the number of icons contained in the file, and the index_offset to locate the index

By reading the header can be deduced some additional infos about the index. We know every entry in the index is 0x10 bytes lenght so... index_entries * index_entry_lenght = index_lenght. Also index_offset + index_lenght = end of file

This is the first glyph, cropped and zlib decompressed individually, is "dualshock circle button" (U+F880 in unicode), every byte works as a color ID, the view mode has been changed to "26 bytes per row" in the hexeditor (for a representation of a 26 pixels width icon) 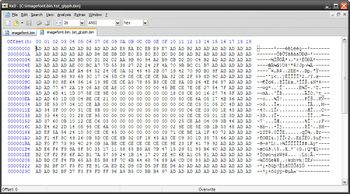 The palette table is composed by palettes of variable size, every palette is compressed individually in zlib format, palettes are concatenated without any padding and in the same order specifyed in the index (one palette for every index entry)

The info contained here can be differenced in two groups, colormap_count and colormap_bpp are the number of colors and color channels that are stored (a.k.a. indexed color) in the colormap area at bottom of the palette, frames_count and animation_time are the number of images of the icon and info about the animation

From here can be deduced some infos, we know the info about every frame is 0xC lenght so... frames_count * 0xC = frames_table_lenght (the position where starts the colormap). And colormap_count * colormap_bpp = colormap_lenght

For every frame of the animation there is an entry here of 0xC lenght with info specific for that frame (doesnt applyes to other frames of the same animation)... in the practise what we are namig a frame here is the same than a image of the Image table that is going to be loaded in the next step

Some static icons in ofw has a timer set for animation_time when technically should be zero (are composed only by one image so only has one frame and the animation should be looping in that frame). Is unknown why are made this way, by now looks like a nonsense/weirdness/mistake/genius

The color_transparent assigns 1 byte value to an color_id that is going to be displayed as a fully transparent pixel (technically is a #00000000), note this byte also indicates a color from the colormap (colormap has info for 256 indexed colors)

Before and after the color_transparent there are 2 unknown areas... could be related with other control colors, or not related at all, not much hints about them

After reading all this info from the different areas of palette ( palette header, the palette frames table, and the palette colormap) the file access order "jumps" back to decompress and load the images... so scroll up the wiki page to continue reading at the Image data table section

The index is composed by entries with 0x10 bytes each, every entry has the info about an specific icon, the info in it can be readed directly (index is not compressed). From this point is explained the different values that composes an index entry

The most important value from a index entry is the unicode_hex_id of the icon, this identifyer follows the same format used by the characters/glyphs inside the TTF font files, in other words... are complementary and both imagefont.bin and the TTF files works like components of the same character map (and it seems imagefont.bin has preference, not confirmed though)

The image_width and image_height tells the dimensions of the icon, no mistery with them, only detail that needs to be mentioned about them is for animated icons composed by several images all the images needs to have the same dimensions, because the dimensions are indicated in the index it means is not posible to create animations with images of different sizes

There is an unknown value at the end, this one should be important (and maybe there is some easter egg hidden in it), is supposed to be a generic descriptor of the icon, or some information needed to know by the firmware about the icon BEFORE accessing any other aditionally data. The point is all the other areas that are going to be accessed in the next steps are compressed in zlib so this unknown value is something that is useful/interesting to know even BEFORE loading the icon data

After knowing all this info about an specific icon the access "jumps" back to find the palette of the icon (located at middle of imagefont.bin), so scroll up to continue reading in the section Palette table above

There are thousands of characters and is pointless to make tables of them, there are also some characters that cant be displayed in a web browser because 99% of the users will not have the fonts installed in PC (like the beauty "drawings" of tibetan alphabet)... but some of this characters are more interesting than others, and are commonly used and included in most fonts, the most interesting groups are the ones that are common for all fonts and used by the system not dependant of the font style (original, rounded, or pop), like the "symbols" and "frame borders"

These symbols can be used in any UTF-8 text string displayed in XMB, (e.g: TITLE, SUBTITLE, DETAIL, inside PARAM.SFO of a content)

Private Use Area (Unicode range from uE000 up to uF8FF)

This ones are special, identifyed by unicode id's like an standard font, and are located inside imagefont.bin. See: http://www.psx-place.com/threads/special-symbols-and-animated-characters-on-the-xmb.13985/