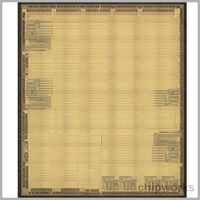 Hot fuming nitric acid dissolves the package without affecting the chip. The procedure should preferably be carried out under very dry conditions, as the presence of water could corrode exposed aluminium interconnects.

Alternatives to heated HNO3 (70% concentration is enough) can be with cold white HNO3 (99% concentration), with sulfuric acid (H2SO4) or with (boilting) rosin (for 20 minutes).

The chip is then washed with acetone in an ultrasonic bath, followed optionally by a short bath in deionized water and isopropanol.

After that chip could be glued into a test package and bonded manually. Having enough experience it might be possible to remove epoxy without destroying bonding wires and smartcard contacts.

On the depackaged chip, the top-layer aluminium interconnect lines are still covered by a passivation layer (usually silicon oxide or nitride), which protects the chip from the environment and ion migration.

On top of this, we might also find a polyimide layer that was not entirely removed by HNO3 but which can be dissolved with ethylenediamine.

We have to remove the passivation layer (top layer of the die) before the probes can establish contact.

Wire bonding Gold is immune to attack from the fuming acids used to etch away the mold compound of the package; copper is not.

Growth of an oxide layer on the surface of a semiconductor to provide electrical stability by isolating the transistor surface from electrical and chemical conditions in the environment; this reduces reverse-current leakage, increases breakdown voltage, and raises power dissipation rating.

The most convenient depassivation technique is the use of a laser cutter. The UV or green laser is mounted on the camera port of the microscope and fires laser pulses through the microscope onto rectangular areas of the chip with micrometer precision. Carefully dosed laser flashes remove patches of the passivation layer.

The resulting hole in the passivation layer can be made so small that only a single bus line is exposed. This prevents accidental contacts with neighboring lines and the hole also stabilizes the position of the probe and makes it less sensitive to vibrations and temperature changes.

An other way to remove the passivation layer is by using hydrofluoric acid.

Boil a chip for a few hours in rosin, like used for soldering. Refluxing equipment is ideal. Should eat away the casing. Might be best used with Dremeling or other techniques to remove the majority of the epoxy first. The active ingredient for this is abietic acid. 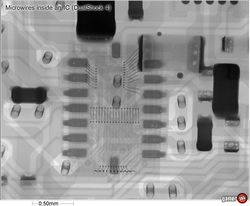 Microwires inside an IC (DualShock 4)