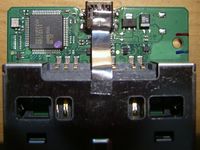 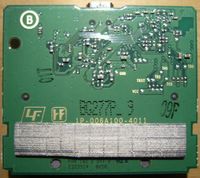 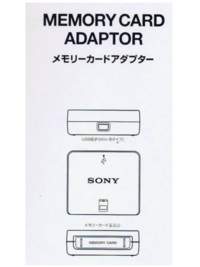 We recently found a new way to install FMCB with the PlayStation3 Memory Card Adaptor (CECHZM1) connected to your PC. Since this device is somewhat cheap, it could be a good alternate way for those who don't have access to an already hacked PS2. The method consist of a command line software and using set of commands (or scripts) in order to install the FMBC hack properly. It also has the advantage to do a multi region/models installation. One restriction is that the software doesn't work with Datel's MC (mainly related with setting a proper termination code for communications) and maybe with some other brands, however it was tested successfully with official 8MB Memory Cards and with some crappy Chinese clones too. Currently the FMCB loader being installed is v1.8c which contain an important kernel fix for the 10K. The util to allow to communicate and sign the file for the MC was made by me and "someone who wants to stay anonymous". Note that without this anonymous contributor it would have been impossible to achieve it. git repository: https://github.com/jimmikaelkael/ps3mca-tool

The Playstation Memory Cards have an interface similar to the Controller Port, which is similar to SPI. They normally have 1 Mb or 128 Kilobyte of EEprom memory. Serial data transfer is LSB-First format. Some bigger non-Sony Cards use internal bankswitching (Multiple virtual Cards with a button switching to the next bank each press / alternatively some do not have a button but rely on buttoncombos with the Dualshock controller). Other bigger non-Sony Cards (e.g. Datel MAX 16MB, 32MB, 64MB, 128MB, 256MB) address it as a single card (and thus can be rely slow).

Aside from the Sanyo LC86F8604A chip, the board additionally contains some resistors, capacitors, z-diodes (for protection against too high voltages), a 6MHz oscillator (for the CPU), and a 5pin reset generator (on the cart edge connector, the supply pins are slightly longer than the data signal pins, so when inserting the cartridge, power/reset gets triggered first; the 7.5V supply pin is left unconnected, only 3.5V are used). 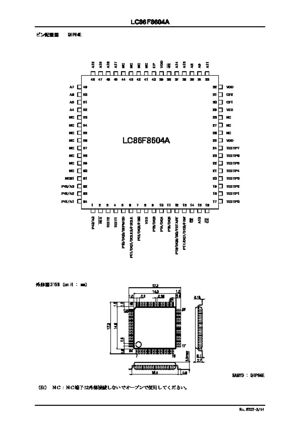 Package pinouts and dimensions of the standard LC86F8604A chip

Caution: The "diagonal edge" at the upper-left of the CXD8732AQ chip is Pin 49 (not pin 1), following the pin numbers on the board (and the Sanyo datasheet pinouts), pin 1 is at the lower-left (near the dot mark) and follow a counterclockwise move notation.

The controller port is exactly the same electrically as the memory card port (with an extra pin, which could be used as lightpen input but most or all controllers leave the pin unused.

Signal from Card to PS1/PSone. This signal is an 8 bit serial transmission synchronous to the falling edge of clock (Both the incoming and outgoing signals change on a high to low transition of clock. All the reading of signals is done on the leading edge to allow settling time).

Signal from PS1/PSone to Card. This signal is the counter part of DATA. It is again an 8 bit serial transmission on the falling edge of clock.

VCC 3.6VDC. The main board in the PS1/PSone has 2 surface mount 750mA fuses, one for each port

ATT is used to get the attention of the card. This signal will go low for the duration of a transmission. Time is 16msec between SEL from previous SEL.

Signal (high) from PS1/PSone to card. Used to keep units in sync. 250kHz clock for PlayStation.

Acknowledge signal from Card to PS1/PSone. This signal should go low for at least one clock period after each 8 bits are sent and ATT is still held low. If the ACK signal does not go low within about 60μsec the PS1/PSone will then start interrogating other devices.