Difference between revisions of "Remote Play"

This feature allows interaction with the Playstation XMB as well as supported PS3 Games/Software and PS1 games. A few settings on XMB are hidden during remote play or can not be accessed. PS3 can provide video and sound to the device or only video to the device (when your PS3 audio output like monitor or audio system is running the sound). PS3 20GB CECHBxx models (and others but unreleased models) can be used if they are using a wired connection to a wireless router even though the internal Wi-Fi hardware is missing.

A flag within the SFO File indicates whether the game supports Remote Play-feature or not.

Open Remote Play is a software project enabling remote playing via PC by dashhacker & friends. This application requires a Playstation Portable for the first-time registration.

Remote Play with Playstation 3 is a Software released by Sony allowing PS3 interaction via Vaio-Computers.

Message when trying to run an app/game

Note: Sony after all, giving finally support for remote play on PC limits everything it could. Result into not being able to play games/run homebrew via RemotePlay. In theory it could be worked-around by patching, after all.

Successfully tested these patches with:

During TGS 2011 Sony showed off a number of examples of how the new device can interact with the PlayStation 3:

noting how a few of the Dual Shock buttons missing on the Vita are mapped to the touchscreen.

When replacing a PARAM.SFO manually in the internall HDD (using a file manager, FTP, etc...), the system can ignores it. This happens because the system is storing a "duplicated" copy of the old one

The most convenience and quick way is as simple as booting the game one time (by pressing X button over his icon)... inside the game press "PS" button and exit with "quit"... then you return to the XMB and the new PARAM.SFO has been loaded. So in resume... the XMB is refreshed when you boot it for first time so you need to boot it two times to load the new PARAM.SFO. (you can change something as the first letter of the title of the game to make sure visually your new SFO is loaded)

If your new SFO is stil ignored by the PS3 after refreshing (mostly fews 3.55+ PSN games and PS1 classic) or you can t boot it (TV not compatible, game order install in the wrong order, previous SFO installed or for easy shared solution purpose, you ll need to overwrite it with your 1.01 SFO from install .PKG (or install first the edited SFO)

Last solution can be rebuild data base by using the option "rebuild database" from the recovery menu (this re-indexes all the files in the internall HDD), is long but can fix rare problems

If Error 80431064 on PSP side: restart the remote play from PSP, it can restart from previous on ps3 side. 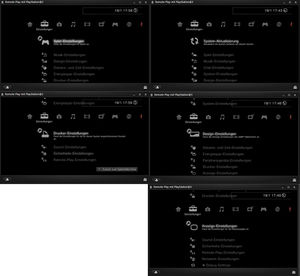